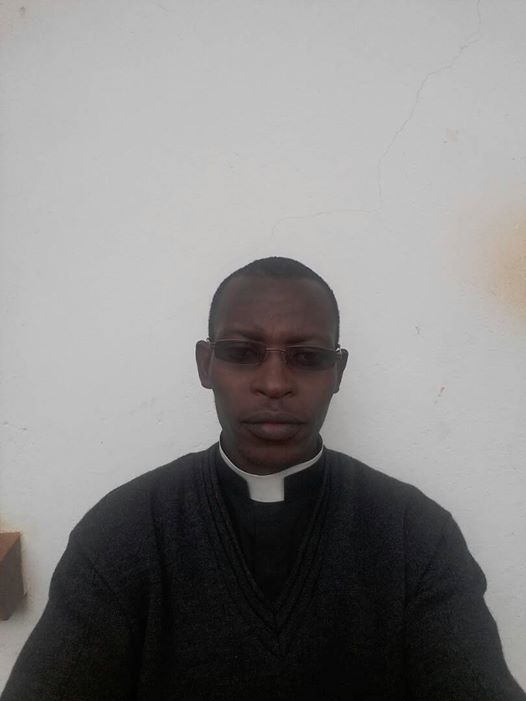 ‘My life as a Redemptorist Brother’ by Br David Nyamuronda, C.Ss.R [transcribed and edited by MC] My journey to priesthood.
My name is Brother David Nyamuronda. I was born in Glenorah in Harare and I grew up in the same place. I did my primary in Glenorah and went to secondary school at Mukai High school in Highfield. After my secondary education, worked for a firm before joining religious life.

My church since childhood was at St Patrick’s Church in Glenorah. I used to serve mass there. I went through different parish priests including Fr Michael Chitewe and Fr Kanhongwa. I was also in the Agnes and Alois guild. In fact, by the time I left for religious life I was part of the executive leadership of the guild.

My role as an alter server and interaction with the various priest motivated me to join religious life. I knew some Redemptorist students from our parish as well and I attended some retreats conducted by the Redemptorists. My first workshop with the Redemptorists was in 1999. That time I met Fr Ronald J. McAinsh who sort of became my mentor. I took time to discern until I decided to join in 2001.
The formation years
I joined the Redemptorists on the 21st of February 2001. That same year, I went to Wadzanai Catechetical Training centre where I did catechetics for one year. After Wadzanai, spend the next three years at Bondolf Teacher’s college where I trained as a primary school teacher. Having completed my course at Bondolf I went to the noviciate for a year in Rustenberg, South Africa. This is a year that one spends reflecting deeply about the Redemptorist life and discerning about one’s vocation. There were seven of us in the noviciate – four Zimbabweans and three Kenyans. Our novice master was Fr David Raju, C.Ss.R from India, Bangalore Province. The noviciate year was also my first time to be outside Zimbabwe, therefore I learnt a lot. In the noviciate I met Fr Anthony Pathe who was one of the pioneers of our Redemptorist Region of Zimbabwe. He was the assistant novice master to Fr David Raju. Fr Anthony Pathe used to bring us along to the outstations when he went for Sunday masses. For me, that was a good experience. We also stayed with Fr Wandile in the community. He was the parish priest of the adjacent parish of Holy Redeemer. Thus the noviciate community was comprised of Fr Anthony Pathe, Fr David Raju, Fr Wandile and the seven novices. The constitution of the community gave me a very good experience of the Redemptorist life.
Education work at Mavambo Trust
At the end of our noviciate, 2007, we came back to Zimbabwe and stayed at Alphonsus House in Tafara. I took my first vows of poverty, chastity and obedience. Given my training as a primary school teacher, I was asked by the congregation to go do Mavambo Trust, a non-governmental organisation in Mabvuku run by the Redemptorists. I taught Shona and religious studies. I enjoyed meeting less privileged kids from different backgrounds that were being helped by the organisation.

Mavambo Trust is a non-profit organisation co-founded by the Redemptorists about 15 years ago. It was started with the aim of helping children who could not afford to go to school. Mavambo mainly takes children who had never gone to school and try to assist them to return to the formal education system. They are taught in an accelerated program for about one to two years at Mavambo before being recommended to return to the formal education system. They resume at different grades depending on performance and age. The organisation will continue to assist there vulnerable children up to ordinary secondary level or advanced secondary level.
Theology at Holy Trinity College
After teaching for two years at Mavambo, I was asked to go and do theology at Holy Trinity College. At this college I met a lot of guys who were studying theology. As a brother, I felt that it was good for me to have the background of theology. As Redemptorists we are missionaries of the word. Thus, theology gave me the background of preaching and a better understanding of the Word of God.
A visit to the London Province
In 2009, I got the opportunity to go to England visiting the various province communities. I visited the community in London, St Mary’s Monastery. I also spent one week at Hawkstone Hall where we did the province chapter. After the chapter we went to Scotland to St Mary’s Monastery. We spent some time there seeing the confreres. We visited Middlesbrough, Edurnbrough and Liverpool as well. There was a preaching mission going on in Liverpool. We were given the chance to address the faithful in Liverpool. We gave them our experience of Zimbabwe, how we saw the Redemptorist life in Zimbabwe. We had about a month in the United Kingdom.
The Spirituality course in Rome
In June 2010, we also got the opportunity to visit our headquarters in Rome on a program for the preparation for final vows. We attended the spirituality course learning about the spirituality of our Congregation. We began in Rome and then moved on to other communities. We went to Scala where our Congregation was began. We were able to see the early communities and to meet the Redemptoristine sisters. From Scala, we visited Naples where our founder, St Alphonsus was born. We proceeded to Pagani a place where St Alphonsus also once stayed and died. We stopped over at Mater Domini, the shrine of St Gerard Majella. We took a visit to Mura Lucano, St Gerard’s birth place as well. Forgia, where there is a community of Redemptoristine sisters was our next stop. The spirituality course, was for me, an eye opener. I had up to that time read about the History of the Congregation form books, but that course gave me the opportunity to actually see the key places.
Return to Mavambo
After a month of touring Rome, we returned home to get ready for our final vows. We took our vows in August 2010. I returned to teach at Mavambo Trust in Mabvuku. This time I taught maths and environmental science. I taught up to 2014.
Developmental work at Caritas Harare
I left Mavambo Trust in 2014 to join Caritas of the archdiocese of Harare as a coordinator. Caritas, formally known as Catholic Development Commission (CADEC) is a social arm of the Catholic Church formed by the Catholic Bishop’s conference of Zimbabwe in 1972 to focus on development work, rural and urban. Caritas is a Latin word which means love. We work with different donor urgencies some of which belong to the Caritas family throughout the world. We are helped with organisations such as Catholic Bishop’s Conference of England and Wales (CAFORD), Catholic Relief Services (CRS) which is owned by the bishop’s conference of the United States of America, The Catholic Bishop’s Conference of Ireland (Trokra), The Catholic Bishop’s Conference of German (Miserio), CODAID, Caritas Australia, Caritas Germany and many other organisations. In brief, we work with other members of the Caritas family to help mostly rural communities.

At Caritas we worked with rural communities especially in Mashonaland East. There were various projects taking place in places such as Mahusekwa, Marondera, Seke (Manyame Rural District Council), Murehwa, Mutoko, Goromonzi and Mudzi. In all these communities we were promoting rural development. We try by all means to help rural communities to have a better life, to improve their living conditions. As Caritas we focus mainly on the Catholic Social Teachings, promoting human dignity.

Roles in the Congregation
Some of my assignments as a Redemptorist brother are that in 2010 I was assigned at St Alphonsus House. Although I was working at Mavambo, I was assigned to assist with some of the work at the house. I also worked with Fr Isaac Davies as an assistant postulant master. When I was moved to St Gerard’s Community in Borrowdale I was appointed as the superior of the house. I was appointed to be in charge of the Redemptorist bookshop as well. I am still working in these two capacities as superior of the house and Director of Redemptorist Publications Bookshop in addition to my role as coordinator of Caritas Harare.
Education
I have already mentioned that I am a teacher by profession having studies at Bondolf teachers college and that I did a diploma in theology at Holy Trinity College. While working, I went on to do my first degree, Bachelor of Education and Educational Management at Zimbabwe Open University. I have also done a master’s degree in Educational management with the same university. My dream is to proceed to doctoral studies.
Pastoral work
I am involved with pastoral work. I try as much as possible to balance between my professional duties and pastoral work. I take my turn to preach in the parish and to give retreats. I do visit the sick as well.