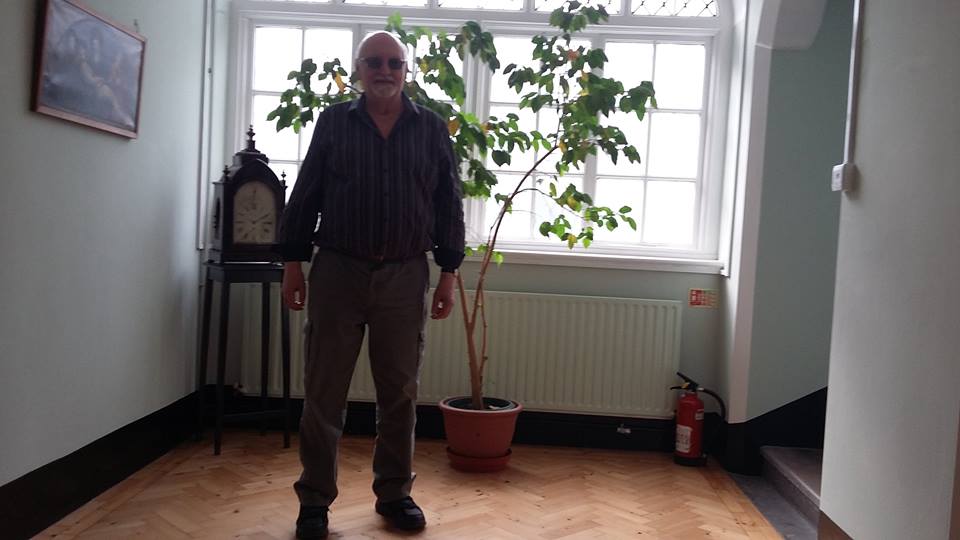 Fr Gerorge Bernard Webster was born in a place called Clapton Park in north east London on the 26th of January 1934. He was five years old when the Second World War occurred and their home was destroyed by German bombing. So he was evacuated with his mother and sister to different parts of England. His father was posted to Burma and was a member of the 14th army fighting the Japanese. Soon after the war in 1945, Fr Webster went to a London grammar school (comprehensive School) called Upton House and achieved university entrance at the age of 16.

He had a distant family in Italy on his mother’s side. So as a teenager he stayed in Italy for about one year. He came back to England at the age of 19 and found a job with the Italian shipping company called Llyod Trestino. He enjoyed working in the City of London but felt no attraction to become successful. It was then he had the first feeling for a religious vocation and he visited different religious orders such as the Jesuits, the Franciscans and the Passionists. However, what attracted him to the Redemptorists was the opportunity to choose between different kinds of work, for example, parish missions, retreat work, parish ministry, the writing ministry and also special ministries both in Welsh and in Scottish Gaelic.

The Redemptorists had a house in the Scottish Highlands at the time as well as one in rural Wales. Fr Webster was accepted for the novitiate by the then Provincial Fr Wilfred Hughes. He says, ‘The noviciate in Perth, Scotland was the happiest year of my life.’ He was professed on the 15th of August 1956.

Fr Webster enjoyed 7 years in Hawkstone and was ordained on January the 13th 1963. Soon after ordination he was given the job of being editor of the Redemptorist magazine called Novena. It had a circulation of about 40, 000 (not bad for a religious magazine at that time, but even now!). However, at Hawkstone he had been training to give parish missions and had developed a strong voice. He felt that he was not temperamentally suited to sit at a desk and edit articles day after day. Therefore, he was relieved when in 1965 the then provincial Fr Lukas asked him to join the mission team at Bishop Eton in Liverpool. They were just beginning, under the leadership of Fr Molloy, to develop youth missions which were given in Catholic secondary and grammar schools (comprehensive schools). Together with his companions, they gave 52 school missions within the space of two years. It was an invigorating and enjoyable time.

Out of the blue, he had a summons from the provincial to join the South African Vice Province as a parish missioners and arrived at Capetown in January 1967. He was two years giving missions and retreats in English all over South Africa but spent about three months doing the same work in Zambia. Unfortunately, when he returned to our house in Heathfield, Capetown from Zambia he was interrogated by the South African police who were suspicious of anti-government activities. He was refused permanent residence.

The new South African provincial was Father Anthony Parth. He was presented with a sudden crisis in our house in Harare in Zimbabwe when a priest serving there suddenly returned to the United Kingdom. Father Parth decided to sent Father Webster. Therefore, in January 1969 he found himself living in Harare.

The rector in St Gerards was Father Phillip Foster (since 1969) who took over from Father Anthony Parth when the latter became Vice Provincial. These two men had began the Redemptorist presence in Zimbabwe. Soon after arriving, the archbishop of Harare, a Jesuit called Archbishop Markall asked the Redemptorists to look after two adjoining parishes of Tafara and Mabvuku. These were on the North Eastern outskirts of Harare, just beyond a suburb called Greendale. There was already a church in Mabvuku dating back to 1947. There was also a fine parish structure with some excellent second and third generation Catholic families.

The parish priest before the Redemptorists took over was a Jesuit called Father Raymond Kapito. He also looked after the next door township called Tafara where houses were still being built. Since there was no church there, mass was in the open air and then in a stable given to the Redemptorists by the Superintended Mr Gosden. At that time Father Patrick Cosgrove was appointed as the parish priest of both Mabvuku and Tafara.

Fr George Webster replaced Father Cosgrove as the new parish priest. During his tenure, with the help of Father Bernard Haring, the church in Tafara was built in 1975. In 1976, money was found to construct a bulk of the present buildings in Tafara. That is, the three rondavels, the old chapel, the retreat house (outdoor kitchen) the main house which would later be extended (it was meant to be the noviciate) and the gardener’s quarters (now Bethany).

In the mid-seventies, Redemptorists began to get postulants. These include Ignatius Nyamupoloto and Peter Nyahalik and a third one whom Fr Webster cannot recall. Father Terry Nugent came up from South Africa to be the novice master at St Gerards and the noviciate would later move to Tafara once the buildings were completed.

In 1975, Father Wilfred Hughes came up from South Africa to be rector and parish priest of St Gerard’s and Immaculate Conception together with Father Campell (stayed for only a year)and Fr John Milcz (curate to Father Hughes). In 1977, Father Wilfred Hughes died in St Gerard and was buried in Greendale cemetery. He died of a heart attack. Father Hughes was replaced by Father George Christiaans as both rector and parish priest in 1980. In the meantime, Fr Webster, as hinted above, was joined in the new place (St Alphonsus) by Father Nugent and the students once the house was completed.

In the mid-1980s, Father Christiaans was moved to South Africa and his job as parish priest of St Gerard’s and Immaculate Conception was taken over by Father Duncen Blacky a Zimbabwean and son of a well-known Doctor. During this period, Redemptorists also began saying mass for the growing population of Hetcliffe. Fr Blacky, would later go back to South Africa following illness and was replaced by Father Lumley-Holmes.

In the meantime, Fr Webster’s parents were getting old and he wanted to spend some time with them. In his absence, Father Alistair McKay looked after the parishes of Tafara and Mabvuku. While in England, he was called back to look after St Gerard’s and Immaculate Conception in 1985 as Father Lumley-Holmes was leaving.

In 1990, Father Ronald J. McAinsh arrived as parish priest of Tafara and Mabvuku with two young Redemptorists students who included John Foley. Soon after his arrival, within months the church in Mabvuku was constructed. He also enlarged and made improvements in Alphonsus House. Infrastructure and the formation programme boomed as if over night.

During Fr Webster’s tenure in St Gerard’s his chief aim was to build a church in Hatcliffe. In the meantime, mass was said in various houses, gardens and empty spaces. With the co-operation of all kinds of people (With special mention of the Chinamasa’s) who helped provide the free services of architects, engineers and survivors from among the parishioners in St Gerard’s. There was the help and encouragement of a remarkable couple from Burkina Faso Mr Pierre and Mrs Clementine Damiba. The church was eventually built by the Portuguese builder called Machado.